48shares
Jump to Recipe Print Recipe
This grilled octopus is tender and flavorful after a short simmer to tenderize it followed by a Greek marinade of lemon, olive oil, and oregano. Serve as an appetizer or meze. Recipe is gluten free and paleo.

Grilled octopus is one of my go-to appetizers because it’s easy, delicious, and never fails to impress. People fight over this dish, and yet it couldn’t be simpler to make.

Octopus is an incredibly nutritious source of protein. Actually, I can’t think of a meat that’s higher in protein than octopus at 68 grams per portion! Not to mention it has a really meaty texture for seafood, making it feel like more of a substantial meal.

This Greek-inspired marinade features the classic combination of lemon, herbs, and olive oil. Since octopus can have a tough texture, the Greek fishermen beat the octopus on the rocks 40 times to tenderize it. Today we will be tenderizing the octopuses by simmering in wine vinegar and wine.

Once the octopus is tender, you want to marinade it so it doesn’t stick to the grill and has a nice flavor to compliment the char.

How long do you boil octopus?

First of all, we are gently simmering the octopus (not boiling) for as long as it takes to be knife-tender. For baby octopus, I recommend 30 minutes but I’ve boiled large octopus for 1 1/2 hours. The good news is that there’s little risk of over-cooking octopus! Keep an eye on the liquid level in the pot and add more water if it starts to look dry.

How to Clean an Octopus

It’s very easy to clean an octopus. Look at the bottom of the octopus to located the mouth hole while simultaneously pushing up on the head to expose a hard beak. You can easily grab it and remove it with your fingers. It may come out in 2 pieces. Alternatively, use a sharp knife to draw a slit to scrape it out.

Your octopus likely has the eyes and head hollowed out already. If so, simply rinse the octopus and place directly into a pot that fits it.

How to Tenderize Octopus for Grilling – Step by Step

For baby octopus, simmer gently on low heat for 30 minutes (or up to 90 minutes for a large octopus) in the wine-vinegar mixture. Meanwhile, whisk the lemon-herb marinade in a bowl (photos 1 & 2).

Assemble the octopus by slicing and serving on a platter with extra marinade. Garnish with lemon wedges.

Since octopus loses a lot of volume during cooking, expect that the finished dish will look quite a bit less than the original quantity. Aim for 1 small octopus as a light appetizer or meze for 2 people to share. As a light dinner, serve at 1-2 small octopuses per person. 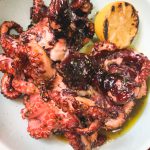