26shares
Jump to Recipe Print Recipe
Homemade almond milk has such a fresh and rich flavor -- better than anything out of a box. It's easy to make if you have a few minutes to blend and squeeze.

When making almond milk from scratch, I like to soak the almonds in boiling hot water first to get an even richer, creamier almond milk. Even though it only takes a few minutes, I like to make a big batch all at once to use throughout the week for Dalgona coffee or as a non-dairy base for smoothies.

One of my favorite late night drinks is a glass of cold almond milk because it’s rich, like a dessert, but won’t spike your blood sugar. So it’s a satisfying way of curbing a craving. Sometimes I like to blend in a frozen banana and some molasses, too, for a quick and easy milkshake.

Is it worth it to make your own almond milk?

As of this posting, almond milk costs about $.05 per ounce, so your typical 1/2 gallon container is $3.20. So the question is, if raw almonds cost roughly $7 per pound, how many almonds could you use to make the equivalent 1/2 gallon of almond milk yourself?

From a purely financial standpoint, it will take approximately 1 3/4 cups raw almonds per 1/2 gallon to break even. I’ve been making almond milk for years, and I generally follow a ratio of about 1 cup almonds per 4 cups water, so the value of making your own almond milk isn’t exactly financial.

To me, the purpose of a milk alternative is to indulge in something delicious and high quality. There’s a purity to freshly blended almonds that can’t be found in a box.

I’ve tasted every brand of almond milk I can find, and I still prefer the freshly blended stuff. My basic almond milk recipe consists of 3 ingredients: raw almonds, water, and salt. That last ingredient is to bring out the natural sweetness of the almonds. Of course, you can add sweetener to the whole batch, but I prefer to leave it out and add as-needed depending on how I’m using it.

What do you need to make nut milk at home?

To get started, you really need a fine mesh strainer called a nutmilk bag, a large bowl to prevent messes, a blender, and a pitcher for storing the milk.

How do you make extra rich and creamy almond milk?

My #1 tip is to use boiling hot water, which breaks the almonds down better than cool water. You’ll notice that the water turns brown after the almonds soak. Sometimes I blend as-is, but sometimes I like to strain the water for a super white color.

You can also remove the skins of the almonds by rubbing them between your fingers. This is time consuming, so feel free to skip this step.

You can see that straining is the first step and squeezing is how you extract the most flavor from the pulverized almonds. I like to do this step over a large bowl to prevent making a mess.

Try the plain flavor first and then experiment with mix-ins.

How to Use Almond Milk

Over the years, I’ve figured some things out with non-dairy milks. To save you the trial-and-error testing:

Last but not least, if you are following the Instagram trend to make Dalgona coffee, I highly recommend using homemade almond milk with your coffee foam (I’ll be sharing a recipe for that soon). 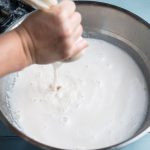 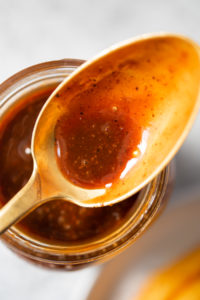 How to Make Chamoy 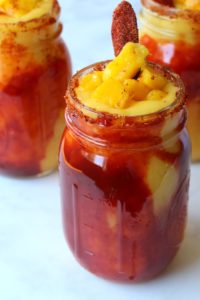